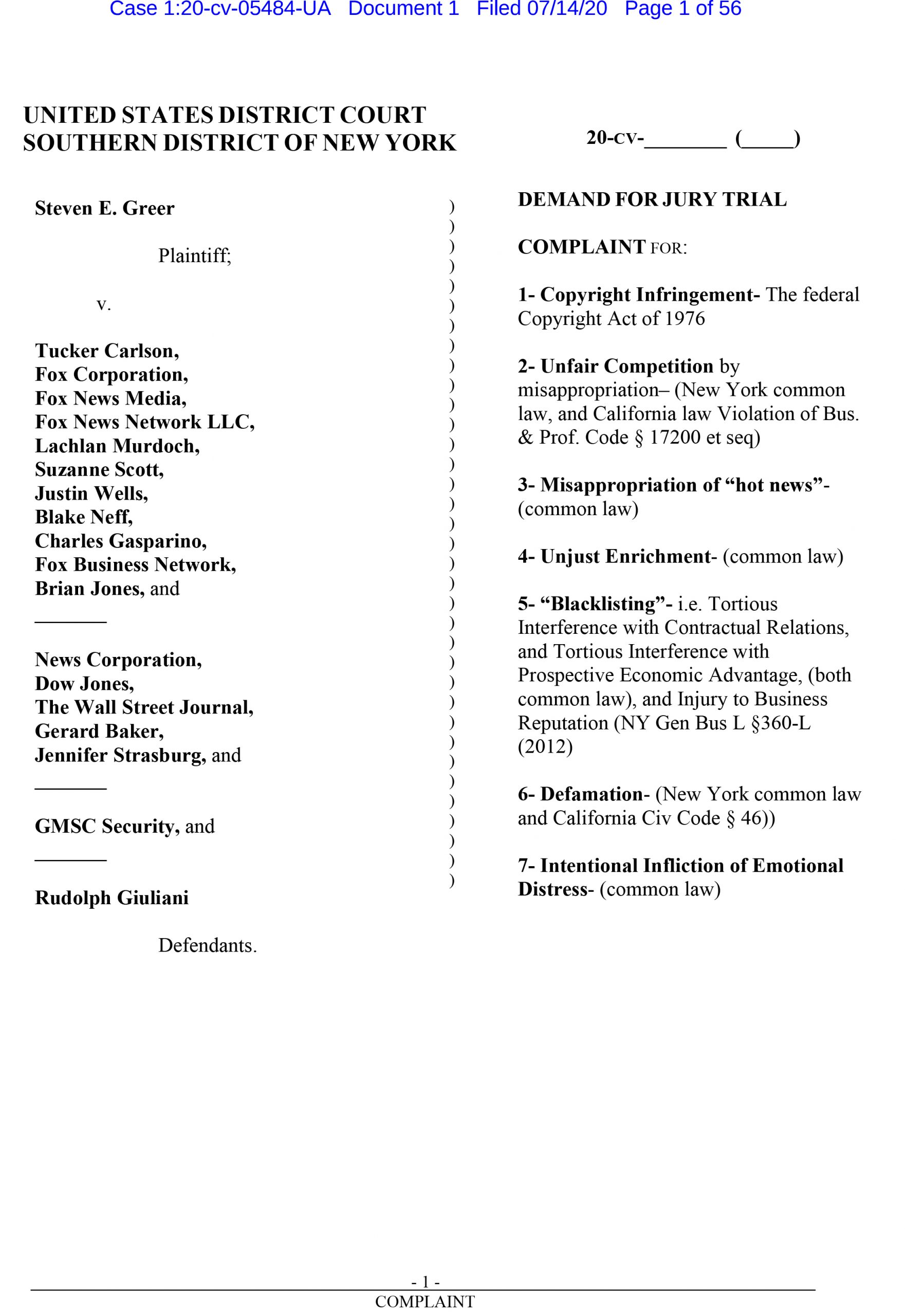 As readers know, I have been in a federal lawsuit against Fox News, et al for almost two-years. I am awaiting an important decision by the judge. My case survived the motion to dismiss, but I appealed some aspects of the magistrate judge’s recommendation.

I sued Tucker Carlson and his producer, Justin Wells, alleging they stole my content and passed it off as their own. Well, it seems that filmmaker Dinesh D’Souza has similar concerns with Fox. He posted these tweets that detail a text message exchange he had with Justin Wells.

Note at the end how Dinesh complains about Justin’s rude tone. I have experienced this same hubris from the little prick. I also had direct exchanges with Tucker Carlson who impersonated another producer at Fox. It was bizarre. I detail it all in my 100-page complaint.

@DineshDSouza: “I’m releasing this exchange because it’s the backstory to understand why Tucker recently had on Catherine Engelbrecht of True the Vote. She was instructed not to mention “2000 Mules” even though the movie was out and the whole discussion centered around the material in the movie.

The story goes back to early February when I produced a teaser trailer for the upcoming film. Tucker invited Catherine to come on the show and she recommended they run the teaser trailer to go with her interview. Everything seemed all set until one of Tucker’s producers–a guy named Alex–told me they couldn’t run the 90 second trailer. They wanted to use just 45 seconds. Turned out they wanted to cut out my name, Salem Media, and any reference to the movie

So basically they wanted to steal our content and pretend like they had produced it. I politely said no. I had earlier clarified with Alex that they should either use the full teaser trailer or not. Yet my refusal to let them go ahead provoked the following exchange

@justinbwells: “Dinish. Justin Wells here. VP and EP of everything in the Tucker world. I just want you to know that I/we won’t forget your little stunt today. If you want to decide how much time to give content on the most watched show in America–then I suggest you produce one in the future. You f-ed over an important show and ally that was trying to do you a solid. Don’t ever bother working on anything with us in the future. And never try to bully my team again. Today’s move was short-sighted and dumb. Good luck with everything in the future.”

@DineshDSouza: “Justin–I told Alex IN ADVANCE that we were offering the trailer as a single piece. I made it clear we did not want it cut. So there were no surprises here. No stunt. You guys want to take our content that we produce at considerable expense and effort. “…cut out all reference to the film, and run with it as your story. That doesn’t strike me as very fair or decent even if you do have “the most watched show in America.” I simply told Alex we will try and place it elsewhere because our original terms were unacceptable to you”

@justinbwells: “We booked Catherine ages ago. The segment came through her. The trailer and everything happened this week. We wanted to help you out. We would have made reference to the film. Absolutely. We would never cut out reference to the film and pass off your story as ours. Our content is far superior to yours. I’m quite confident in that. You live in a fantasy world. You f-ed with our booking on the day of a segment. “I don’t take your tactics/stunt or a-hole move lightly. If you want a full 90 seconds for your trailer then buy an add (sic) on the show for a full 90 seconds. No more free ads for you. Thanks for trying though.”

@DineshDSouza: “Catherine is her own person. I produced the trailer and that was my only condition that I made clear to Alex. Use all of it or don’t use it. He understood and said so. I am no party to any other discussions so where have I acted badly here? You knew what my terms were but decided to go a different route. That’s fine. But I am at liberty, am I not, to hold to my original condition? I didn’t mess up your schedule. You presumed you could just go ahead and cut the trailer and that I would give in and say fine. I’m producing this movie in conjunction with Salem Media and they don’t want to have it cut. So this is not about who lives in a fantasy world. I don’t and I’m not suggesting you do either. I’m just trying to make the case for the consistency and reasonableness of my position.

@justinbwells: “Bulls-t. You’ve wasted enough of our time. We feel terrible for Catherine though. I didn’t know what your terms were. You dumped them on us at the last minute. You and Salem are dictating how much of a trailer a news show runs that’s trying to give you promotion? I suspect the Today show cut the Titanic trailer when they had Leo and Kate on back in 1996. Who are you to create bogus terms on length of promotional content when we’re trying to help you out? Pathetic. There is nothing reasonable about your position. It’s moronic.”

End of exchange. I’ll conclude with just a couple of observations about this sorry encounter. Contrast my attempt to be civil and decent throughout with Wells’ abusive tone. Note also that Wells makes it clear (“I/we”) he’s speaking for both him and Tucker.

What corporation in America can get away with treating people this way? Remember I’m a regular Fox guest. I’ve been appearing on the network almost every week for a couple of years. Even so Tucker’s team has no compunction about adopting this imperious, insulting tone.

At the very least I believe I’m owed an apology by Wells and Tucker. If it’s Wells acting on his own, and if this guy is so out of control that he can’t deal in a civil manner with people, why does Fox keep him? He’s giving the company a very bad name.

Suzanne Scott the CEO of Fox needs to address this issue, not because of the exchange itself, but because it seems to be the explanation, or a big part of the explanation, for Tucker suppressing any mention of “2000 Mules” on the air.

The movie is important because of the issues it raises. Without honest elections we’re no longer a constitutional democracy. The country is at stake. Fox is an important force for good and so is Tucker. I’m hoping that both will rise above pettiness here and do the right thing.

(If anyone knows Dinesh, please tell him to contact me.)

This entry was posted in - Op-Ed, - Politics, Courts and Law, Propaganda, Hollywood, and News Essays. Bookmark the permalink.