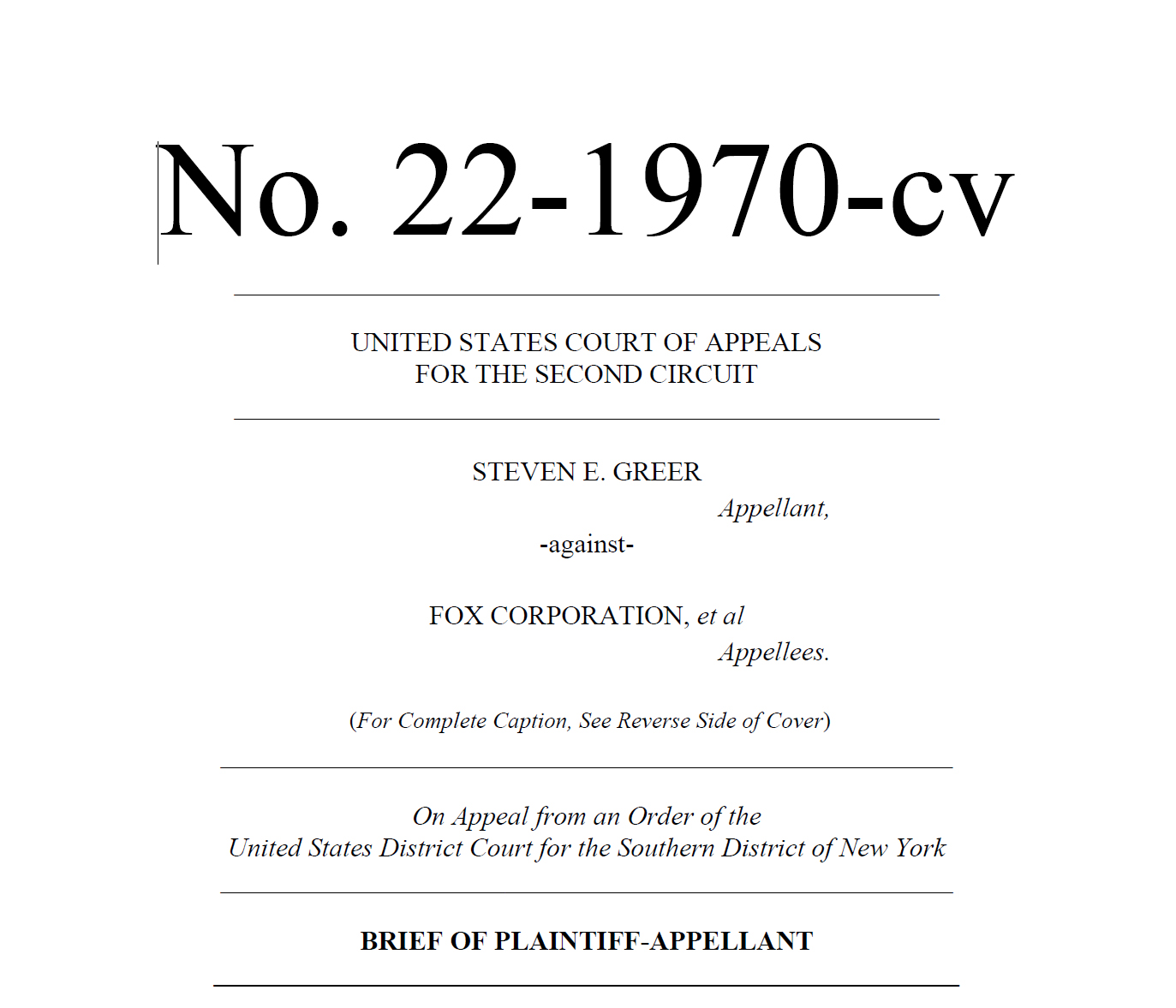 Update September 24, 2022- The Second Circuit gave me a case number of Greer v. Fox Corporation, et al 22-1970-cv. The briefing should be in before Christmas and I should have another early Spring oral argument.

My main argument is that the lower court district judge ignored my argument totally. I said that it was circular logic for the district court to say I should have used copyright law when the Supreme Court in 2019 ruled that I was not allowed to use the copyright act. When a judge ignores something totally, it means they have no argument and do not want to lay out reasoning that will help an appeal.

Of note, the merits of my complaint have never been challenged. No judge has ever suggested that Tucker Carlson and Justin Wells did not steal my ideas. They also have not argued that my use of torts (i.e., misappropriation, etc.) are wrong. Instead, the court used a legal technicality of “preemption” to toss this out.

The politics of this make it more interesting. Normally, any appeal has a slim chance of winning. But in this case, since it is Fox News, who knows.

I will take this to the Supreme Court if I have to. The district judge ignored one of Justin Ginsburg’s last rulings.

Update September 8, 2022- I appealed the magistrate decision from June of 2021 that dismissed key causes of action. I did not want to be left with just a pure defamation case. My main beef was with Tucker Carlson for stealing my ideas.

There was a slim chance that the judge would overrule her magistrate. I knew that. I wanted this to be able to go to the Second Circuit Court of Appeals. As expected, the judge did not agree with my appeal of the magistrate report. So, it looks like I am heading back to the 2d. Cir.

This is what I found important from the ruling. No judge in this case has ever questioned the underlying merits. No one doubts that Tucker Carlson stole my ideas. They dismissed the case based on a legal technicality. I highly suspect the court does not want to set a hugely important precedent in copyright law based on a pro se litigant.

Regarding that “copyright preemption” matter, the judge ignored my argument, which means they know I am right. I intentionally did not use copyright law for my causes of action but the court claims I should have (i.e., the preemption). Well, in 2019, the Supreme Court ruled that it would be impossible for me to use copyright law because I did not register my content. So, it is circular logic for this lower court to say I should have used copyright law when the SCOTUS ruled I am not allowed.

I will take this to the Supreme Court, again, if I have to.

Of note, the Judge, who is the Chief Judge of the entire SDNY, gave me this compliment in a footnote:

“The Court notes that, although Plaintiff is proceeding pro se in this action, he is a fairly sophisticated and experienced litigant, who appears to possess a good understanding of the law—and thus will be treated with slightly less solicitude than might normally apply to a completely un-resourced and inexperienced pro se party. See Benitez v. King, 298 F. Supp. 3d 530, 540 (W.D.N.Y. 2018) (“[W]hile all pro se litigants deserve some degree of leniency, where a litigant has some experience with the legal system, courts may treat him less leniently than wholly inexperienced pro se litigants.”) (citation omitted).”

In my federal lawsuit against Fox News and News Corp (Greer v. Carlson 20-cv-5484), I defeated the motion to dismiss with regards to the blacklisting and defamation causes of action. However, the judge surprisingly ruled that copyright law preempts my other “theft of ideas” common law arguments. I had thought the 2019 Supreme Court decision by Ginsberg clearly stated I cannot use copyright law because I had no copyright registration at the time of filing.

Here is the decision.

Now, you are going to read this and think I am delusional because everything in my complaint was dismissed. No. The judge bent over backwards to let me replead the blacklisting and defamation. That is very unusual. He also did not rule on the merits or evidence of the theft of my ideas.

This case is very much alive. The only setback is that I cannot go into discovery and move towards trial yet. I think this is a 90-day delay.

I can now file the copyright infringement causes of action in a new complaint, which is what I think the judge wants me to do. They know it is messy to rule in my favor the way it is now using common law torts rather than copyright law.

Recall, I originally used the copyright act in this complaint, but then learned that, since I had no copyright registration at the time I filed the case, I was not allowed to use the copyright act, per 2019 Supreme Court ruling. So, I changed tactics to argue misappropriation of ideas, and ideas are not copyrightable. It is cleaner now that I can use copyright law with a new and different complaint (But this existing complaint is still alive for the blacklisting and defamation).

I could also just appeal this “copyright preemption” part of the decision and not file a new copyright complaint. This decision ignored many of my arguments against preemption and goes against numerous large cases that are on my side of the argument. By ruling that copyright law preempts my common law claims, they escaped having to address my arguments. However, I think this would not survive on appeal.

Note that nothing in this decision states that my allegations of theft of my ideas are invalid or delusional. Nothing says that Fox did not blacklist or defame me. This is not a decision based on the evidence. It is only based on how I pleaded the case.

Basically, the judge said I did not specifically enough state who said what and how that defamed me. I will simply ask many Fox people, now fired and on bad terms with Fox, what they know.

All of my allegations are very much alive. This decision just lets me adjust the scope on the rifle and be more precise. It is a recipe for how to properly allege defamation and blacklisting.

This entry was posted in - Op-Ed, Courts and Law, Wall Street. Bookmark the permalink.