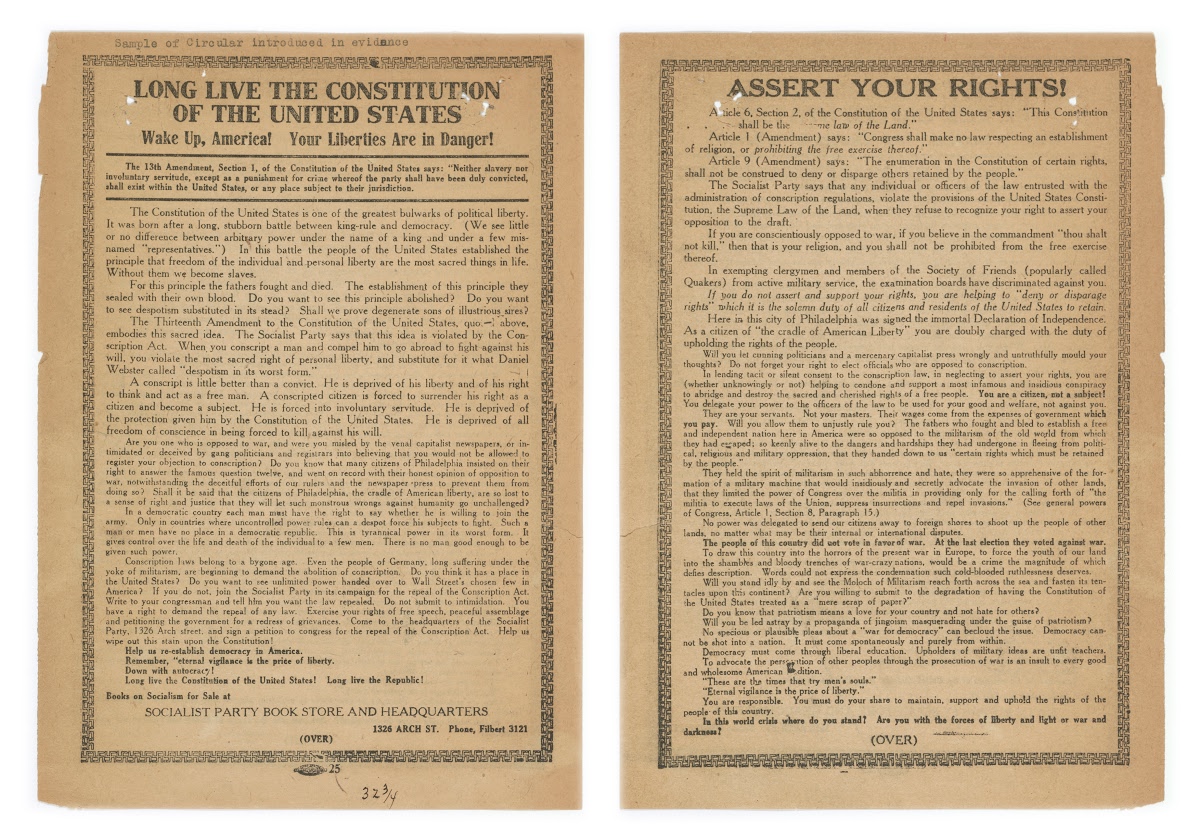 I saw this on Tucker Carlson. Back in 1917, Charles Schenck opposed the dictatorship-like policies of President Woodrow Wilson and plans to draft men into WW1. He published pamphlets opposing Wilson’s policies (above). Wilson’s DOJ then charged him with espionage. This led to the  the classic Supreme Court case that created the oft-quoted, “You can’t yell fire in a crowded theater”.

From Wikipedia, “The United States’ entry into the First World War had caused deep divisions in society, and was vigorously opposed, especially by those on the radical left and by those who had ties to Germany. The Wilson administration launched a broad campaign of criminal enforcement that resulted in thousands of prosecutions. Many of these were for trivial acts of dissent.

Charles Schenck and Elizabeth Baer were members of the Executive Committee of the Socialist Party in Philadelphia, of which Schenck was General Secretary. The executive committee authorized, and Schenck oversaw, printing and mailing more than 15,000 fliers to men slated for conscription during World War I. The fliers urged men not to submit to the draft, saying “Do not submit to intimidation”, “Assert your rights”, “If you do not assert and support your rights, you are helping to deny or disparage rights which it is the solemn duty of all citizens and residents of the United States to retain,” and urged men not to comply with the draft on the grounds that military conscription constituted involuntary servitude, which is prohibited by the Thirteenth Amendment.

After jury trials, Schenck and Baer were convicted of violating Section 3 of the Espionage Act of 1917. Both defendants appealed to the United States Supreme Court, arguing that their conviction, and the statute which purported to authorize it, were contrary to the First Amendment. They relied heavily on the text of the First Amendment, and their claim that the Espionage Act of 1917 had what today one would call a “chilling effect” on free discussion of the war effort.”

Read the actual pamphlet above. It sounds like me today in 2021. I too use the term “Wake Up America” like Schenck. The similarities are chilling. Schenck was right then and I am right now.

Propaganda is a common term thrown around today, but it started under Wilson. Schenck writes about it. He also accuses the newspapers of being in the pockets of “capitalist” companies, ala William Randolph Hearst. Today, all of the major news outlets are owned by large multinational corporations, such as Disney Google, and Comcast.

Back then, WW1 was unpopular and thrust upon Americans by corporate interests. It resulted in no gain for the US and was pointless. Today, we are still fighting the Military-Industrial-Complex simply to get out of the ongoing Iraq and Afghanistan wars, which too were pointless.

The constitution has been watered down for far longer than I had realized.

The Supreme Court judges have been subservient to president too. Oliver Wendell Holmes, who upheld the convicted Schenck, was afraid of President Wilson. Today, Chief Justice John Roberts is afraid of enforcing the constitution because he too is afraid of the executive branch.

In 1917, the Bolshevik Revolution in Russia had allies here in the US and they engaged in terrorism, like bombing Wall Street with a cart of dynamite (Schenck was a “socialist” and part of this). We have that today in BLM and Antifa.

Woodrow Wilson was a HUGE racist of the KKK kind. We have raging race wars today.

The totalitarian regime of Wilson singled out vocal opponents and jailed them under sedition laws. We see that now with Rudy Giuliani’s apartment being raided, Roger Stone arrested by armed FBI, etc.

Back then, Schenck was trying to “wake up” a complacent America unwilling to fight for the freedoms granted to them by previous heroes. The same is occurring now.

100-years ago, things were a lot like they are now. It is eerie how similar are the two eras.

(There is a big difference between 1917 and now. The Spanish Flu, which killed 50% of the people it infected, as opposed to under 1% killed by the “COVID” virus, was raging in 1917-1918. The government responses could not be more different. Elections went on as normal in 1918. Most people ignored the virus despite dead people in the streets. Masks were tried and then medical societies ruled that they did not work, and so on.)