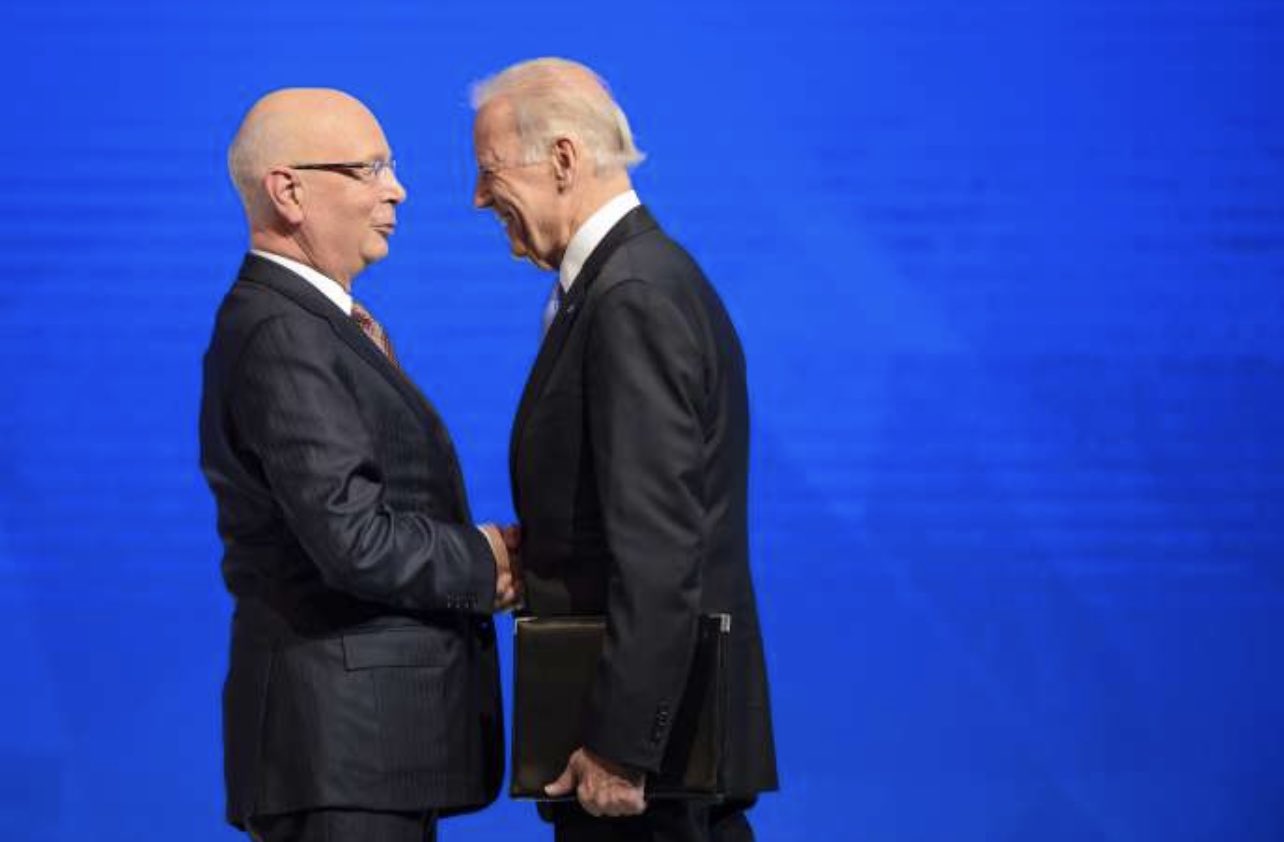 For the first half of 2022, the shadow globalist government that seems to be led by Klaus Schwab of the WEF was taking it on the chin. There were numerous examples of WEF-installed leaders who were ousted. The U.K.’s Boris Johnson was ousted, replaced by WEF stooge Liz Truss, who was not obedient enough to the WEF, who was then replaced by fully obedient globalist Rishi Sunak, a former Goldman Sachs banker. France’s Emmanuel Macron was neutered by the election of Marine Le Pen who took over the government as he remained a lame duck. Australia’s pro-lockdown Scott Morrison was ousted. Italy’s Draghi resigned and was replaced by “far-right” Giorgia Meloni. Canada’s Justin Trudeau survived an election that was rigged and faced a rebellion of large truckers and farmer who shut down the highways. He was forced to suspend the constitution to stay in power.

Then in August, Klaus staged a counter-offensive. Biden gave the infamous “Red Speech” with the red lighting backdrop and angry rhetoric designed to look like a Hitler rally. The Fourth Reich was launched in public. Under the pretext that January 6, 2021 was an “insurrection”, the House arrested political opponents. Trump senior officials Steve Bannon and Peter Navarro were arrested by the FBI for ignoring subpoenas, allegedly. Ryan Kelly, the challenger to Michigan Governor Whitmer, was arrested and taken out of the race. Simone Gold, a medical doctor opposed to the NIH-CDC “Faucist” handling of the pandemic was sent to prison for being at the Capitol on January 6th. Trump’s house in Palm Beach was raided. In November, AG Merrick Garland opened powerful federal “special counsel” investigations to perpetuate the harassment of Republicans that the House January 6th committee had been doing and to evaluate the documents taken in the Trump Mar-a-Lago raid.

The United States of America saw the equivalent of WW2 Stasi or SS troops in the form of “FBI” become a reality. Dystopian books by Orwell, etc. had come to life.

Related, in December, more of the classified documents related to the JFK assassination were released, but the important items were still kept secret. Fox News’ Tucker Carlson spoke to a person who had seen the files and confirmed that the CIA orchestrated the murder of President Kennedy.

The WEF’s Great Reset regained momentum in August when the strategy changed from fearmongering the COVID “variants” to using the implausible claim that “climate crisis” required martial law authority. It was used to pass trillions in inflation-causing spending bills.

In November, they rigged the midterm elections using the same tactics as they used in 2020. The WEF candidates were so unpopular that they did not even debate. Then, election-day irregularities found the votes to make them win. The losers, such as Dr. Oz and Kari Lake, were targeted by the WEF because they were strong Trump supporters. When they lost to terrible opponents, such as brain-damaged Fetterman or open-borders Hobbs, it gave the appearance that Trump was radioactive and no longer a viable 2024 candidate. The global shadow government also rigged the Brazilian election. Their version of Trump, Bolsonaro, was overthrown by a very unpopular man who was in prison a few years ago.

Then, the WEF’s Fourth Reich overplayed their hand. The war in Ukraine was being won by Putin. As Biden and the Democrats tried to blame the high costs of gas and food on Putin and the war, it made people ask why the U.S. was fighting for Ukraine. With the Democrats losing support for new spending bills, they flew Ukraine puppet Zelensky to the U.S. to speak before Congress like a State of the Union speech. It was widely seen as a repulsive stunt by Nancy Pelosi, but it succeeded at getting another $2 trillion in sending passed.

When Elon Musk began the process of shutting down censorship programs within Twitter, the globalist plans suddenly had opposition voices again. Musk released files to journalist that exposed how FBI, CIA, and military employees were working inside Twitter and colluding with the government to silence anyone not towing the party line. Anthony Fauci, et al were covering up the truth about his NIH creating the COVID virus, vaccine safety, how they implemented lockdowns without science to support the actions, etc. Fauci “resigned” to avoid the 2023 House hearings that will investigate him (This is why “climate change” had to become the new pretext for martial law. Their scamdemic had been exposed.)

Twitter also helped expose China’s “Zero Covid” policy of locking down large cities and building concentration camp cites was exposed. Globalist companies like Apple knew they could no longer use Chinese slave labor and began to leave the country.

In Canada, the Fourth Reich was boldly promoting euthanasia of all ages, down to young children. Anyone with a minor disability or slight case of depression was being encouraged to kill themselves. Efforts were also made to restrict food production and confiscate private farm land, as the WEF succeeded in doing with the Netherlands.

By December, the recession was undeniable despite The White House denying it. People were accruing credit card debt. The cost of living was too high. Layoffs had begun. Stock portfolios were down. The oligarchs were not immune. They lost $600 Billion in personal net worth with Elon Musk being the biggest loser (They made $340 Billion in 2021). The S&P index was down 20% for the year with tech stocks down more than that. The 2008 crash was the last time the market ended down that much.

2022 ended with gloom in the air. Social media images of New Year’s Eve were depressing. People were not eagerly meeting the new year.

What seems certain with the economy is that the GDP will shrink, companies will fire people, and the Federal Reserve will keep interest rates high. It could trigger the worst global depression ever.

This country is mostly uneducated and oblivious to abstract concepts, such as civil rights lost by oppression. It is a nation of people who expect a certain standard of living. However, if the economy in 2023 causes widespread unemployment and worsening inflation, it could be the spark that ignites it all.

After three years under communist control of the O’Biden admistration, Americans are ready to rise up and stop playing the role of the sheep.

With the stock markets, the Fed will keep terminal interest rates higher than expected throughout the year. The S&P can easily go down to 2,500 (where it was at the lows of 2020) as earnings and multiples shrink.

One stock that could rebound is Tesla. Elon Musk can easily turn Twitter into a platform that competes with YouTube, Google, and PayPal and power by his own smartphone to kill Apple. His Tesla and SpaceX have the technology and manufacturing ability. Then, his StarLink internet could compete with the large Internet providers. Meanwhile, the Tesla semi-trucks will sell well regardless of the bad economy. All of that could make Tesla a several-trillion market-cap stock.

In Congress, the House will begin reform and investigations. WW2-style Nuremberg hearings will look at the role Anthony Fauci, et al played in crating the COVID virus, covering it up, and promoting unproven gene therapy “vaccines”. There might be enough anger to shut down the CDC and FDA as we know them. Florida has convened a criminal grand jury to possibly jail Big Pharma and government officials. There is also support for FBI and IRS reforms.

With the fate of Democracy in her hands, the Kari Lake challenge of the rigged Arizona elections have great importance to the entire nation. The midterms were a line in the sand. If they get away with that, there will never be another fair presidential election.

If Kari Lake becomes the governor in Arizona, look for Texas and Florida to join Arizona in using National Guard to close the border. She will also revive Trump as the presumed 2024 candidate over DeSantis.

However, the executive branch will still be controlled by the shadow government. Look for Oklahoma, Florida, and Texas to pass laws making Biden’s executive orders irrelevant to those states. A Cold Civil War will begin.

Globally, the large corporations will not support Klaus Schwab’s Great Reset agenda as much as they have done in the past. BlackRock has already seen pushback for its role in promoting ESG. Other Wall Street banks are no longer supporting ESG. CEO’s of failing media and tech companies will be less inclined to march to woke orders from the WEF. China’s economy will likely stay stagnant on 2023 as cases of COVID cripple the supply chain.

2023 should be a tumultuous year. People know it is going to happen.

“This is the end

Of our elaborate plans, the end

Of everything that stands, the end”