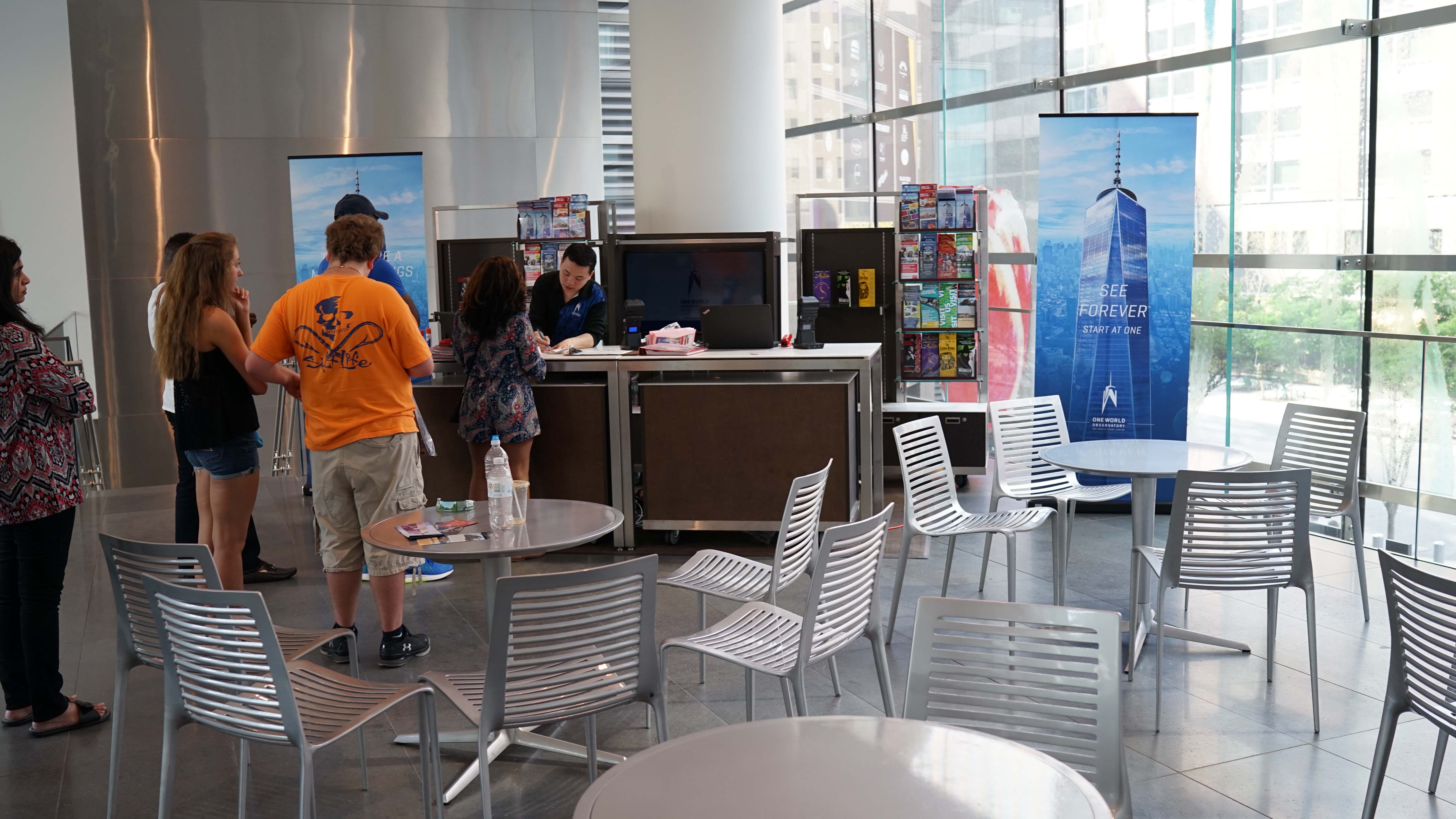 May 29, 2016- The NYT has a lengthy article about the failure of the 1 WTC observatory and 9/11 memorial. Remember those huge crowds in line? They are gone. That is why they have a satellite ticket office in Brookfield Place, to try to snare those sucker tourists.

The NYT wrote, “When the observatory complex opened last year on the top three floors of the new Lower Manhattan building, its operator, Legends, predicted that it would draw 3.3 million visitors annually.

That was optimistic by a million.

This week, the video wall in the Global Welcome Center, which displays a running tally of visitors, put the total number at just 2.3 million since the observatory opened on May 29, 2015.

And it appears that the river of tourists has slowed over time. One World celebrated its one-millionth visitor last September, four months after opening. But in the eight months since then, only 1.3 million have made their way to the attraction, perched 1,268 feet above city streets.

With the standard ticket price set at $32, the shortfall in attendance is significant for the Port Authority of New York and New Jersey, which owns the building, together with the Durst Organization. The authority, which has spent tens of billions of dollars rebuilding the trade center, hoped the observatory would be a major revenue generator.

In the past, the authority claimed that its lease with Legends would generate $875 million over 15 years. Legends pays the authority a flat rent of $14.6 million a year, and as much as 50 percent of the revenues above certain undisclosed thresholds.

Legends and the authority insist that the observatory is a success, although they both refuse to release any rent or revenue numbers for the publicly owned property, citing a confidentiality agreement. They say the observatory hit its numbers for 2015.

“Between revenue numbers and customer reviews, we couldn’t be more happy,” said Shervin Mirhashemi, president of Legends, which is owned by the New York Yankees and the Dallas Cowboys. “We look at our attraction as a premium experience.”

Still, the National September 11 Memorial and Museum attracted 2.9 million visitors over the past year, 600,000 more than One World Observatory.

The authority selected the company in 2013 to run the attraction at the trade center over more experienced operators.

Barry Tenenbaum, president of New York City Vacation Packages, a tourism company, said the observatory’s problems might be rooted in Legends’ failure to court tour operators, which often buy tickets in bulk, at a significant discount.

Tourists from other countries often purchase a package with tickets from museums and other attractions before they land in New York. The standard package for Mr. Tenenbaum’s company includes admission to either the Empire State Building or Top of the Rock, but not to One World Observatory.

“Legends really doesn’t have a lot of experience in the tourism market,” Mr. Tenenbaum said. “I would like to think that’s why their volume is not up to snuff. I think they’re going after the corporate market as much as the tourist market.”

Mr. Mirhashemi said that Legends was working with tour operators, “but on a very selective basis.”

Soon visitors will have even more choices. On the West Side of Manhattan, a new competitor at 30 Hudson Yards, which claims it will have the highest outdoor deck, on the 89th floor, is scheduled to open in 2019, with another at 1 Vanderbilt, next to Grand Central Terminal, to follow.

Analysts have wondered how many observatories are too many in New York.

But some people think the sky is the limit. “The city could definitely accommodate three, if not more, observatories,” said Andrew Luan, owner of New York Tour1, a guided-tour operator.”