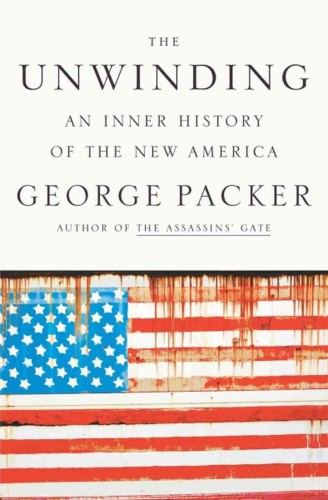 Sometimes, things sit around your house for so long that you forget they are there. I bought the book by George Packer called “The Unwinding” two and a half years ago, and finally finished it. It was a New York Times Bestseller in nonfiction that depicts how society has crumbled in the United States since the 1980’s.

The book is a collage of chapters with seemingly unrelated stories tossed together. But the bigger picture unfolds in the end.

The most educational chapters are the ones on the famous characters from politics, finance, and media. For examples, in Part III, Chapter One on Jeff Connaughton, Packer explains how Robert Rubin laid the foundation for the financial collapse of 2008, and yet still benefited from a high position in Citigroup afterward. Or, in the chapter on Citizen Journalist: Andrew Breitbart, he explains how the repeal of the FCC’s Fairness Doctrine in 1987 led to the syndication of Rush Limbaugh, and the rise of Fox News on the right. The chapter on Oprah is particularly interesting, which I will not spoil for you.

With the 2016 presidential election in full swing, the disenfranchised masses are voting for non-establishment candidates, such as Donald Trump and Bernie Sanders. “The Unwinding” explains the three decades of history that have led up to this moment. For that reason, this 2013 publication is very timely today.

This entry was posted in - Op-Ed, - Politics, Reviews. Bookmark the permalink.