Case Example of how to stop radicals: Trevor FitzGibbon 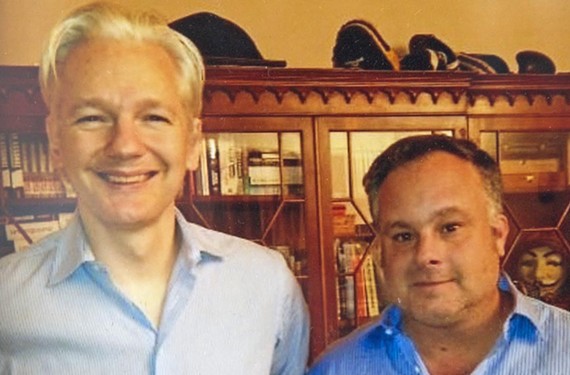 I recently was looking around for a publicist to help with my book. A man named Trevor FitzGibbon was referred to me.

We spoke on the phone and seemed to have a lot in common. He too had been the victim of retaliation from the far-left. His story is fascinating and fits in with my Rules to Stop Radicals.

FitzGibbon started his PR career working for the far-left, with organizations like MoveOn.org. But everything fell apart for him in 2015 when his work for Julianne Assange and Wikileaks backfired.

When Wikileaks got a hold of the DNC and Hillary Clinton emails, and started to release them before the 2016 election, the Hillary and Obama stooges mobilized their armies to attack anyone assisting Wikileaks. In the case of FitzGibbon, he was falsely accused by a female lawyer, Jesslyn Radack, of raping her.

A local state prosecutor investigated the allegations and declined to press charges because the woman was clearly a consensual sexual partner. Text messages from her to FitzGibbon stated, for examples, ““I’m REALLY sore. Haven’t been fucked like that ever.” FitzGibbon replied, “So sorry,” and, “Delete these!” (which Radack agreed to do).”

Meanwhile, FitzGibbon’s life was ruined. He had no career and his PR firm was shut down. The Hillary stooges managed to get his entire PR firm to turn on him.

Los Angeles lawyer Charles Harder defeated the Gawker blog and won hundreds of millions for client/plaintiff Hulk Hogan. But Peter Thiel was secretly funding that one to get revenge for Gawker outing him. Few lawyers have the ambition to take a case to trial on contingency.

But FitzGibbon found such an attorney in Steven Biss, who had recently orchestrated settlements in defamation cases against and is the lawyer for a defamation case filed by California Congressman Devin Nunes. Most of his clients tend to be conservatives.

In the case of FitzGibbon v Radack, they not only prevailed with settlement for a sizable dollar amount, got a full retraction from the accuser, but they destroyed opponent making the false rape allegations. Radack was sanctioned by the federal judge and almost jailed. She had to file for bankruptcy protection.

In the judge’s order, he wrote:

“Radack acknowledges making the comments which prompted the issuance of the ORDER TO SHOW CAUSE and apologized for them claiming that they were “a desperate. emotionally charged, reflexive attempt to defend herself and respond to attacks that appeared to her to be coming from or orchestrated by the Plaintiff.” In sum, Radack acknowledged that she deliberately violated the July 31, 2018 ORDER, but did so in a misguided attempt to defend herself.

The fact that a lawyer knowingly would violate an Order of the Court enjoining her from engaging in certain conduct is an extremely serious matter which cannot be excused by contrition, settlement, illness, or financial distress. The simple fact is that Radack deliberately violated the July 31, 2018 ORDER by making the communications that she admittedly made. In so doing, she acted in contempt of the ORDER.

Accordingly, it is not appropriate to dismiss the ORDER TO SHOW CAUSE without the imposition of an appropriate sanction. The purpose of the sanction is to discipline the offending party, to set an example for others who would violate the Orders of the Court, and to underscore the authority of the Court to issue Orders that will not be violated.

Here, Radack knew precisely what she was doing, and, in violating the ORDER, Radack continued to engage in the same kind of conduct which prompted the litigation against her in the first place. Accordingly, she must be appropriately sanctioned in a way that will punish her deliberate violation of the ORDER and will underscore the authority of the Court and will deter other violations.

To that end, the Court concludes that an appropriate punishment for violating the July 31, 2018 ORDER is that Radack be held in contempt of Court for committing the violation so that, wherever she seeks to practice, she will have to report that she has been held in contempt of Court. That, for a lawyer, is an extremely serious punishment. Considering Radack’s expression of contrition and the action she has taken to eliminate the offending communications, the Court concludes that incarceration is not appropriate or necessary.

A monetary sanction is an appropriate punishment as well. However, because Radack is further evincing contrition for improper conduct by reaching a settlement with the plaintiff, the Court considers that a substantial financial punishment is neither necessary or appropriate. However, it is appropriate to assess a monetary sanction of $500.00 to underscore the seriousness of Radack’s violation. Radack shall remit payment by May 30, 2019 to the Clerk of Court.

It is further ORDERED that the facts and legal contentions are adequately presented in the materials before the Court and oral argument would not aid the decisional process.

It is so ORDERED.”

This is the type of aggressive response that I advocate in my Rules to Stop Radicals. The low-level peons who think they can gain 15-minutes of relevance by pandering to the fascists of the far-left need to incur steep penalties.

Meanwhile, Trevor FitzGibbon remains a destroyed man whose name is forever blacklisted, and Julianne Assange is in a secret European prison somewhere failing in health. President Trump needs to hire FitzGibbon and Biss for his 2020 team and pardon Assange.

Update July 6, 2019- I feel like I am like Wikileaks now. I got a tip from Switzerland that Trevor’s lawyer filed a new complaint against Jesslyn Radack for continuing to blog and defame him in social media, defying the terms of the settlement. The woman seems truly deranged, like all of the other Trump accusers (she is a big Trump hater).

Here is the actual complaint filed this week. RADACKvFITZGIBBON Complaint