June 24, 2015- The WSJ reports today that people in FiDi are waking up and realizing that their apartments are actually rent-stabilized due to the 421-g law. In one case, the landlord is trying to intimidate people from raising the issue and proactively sued a tenant after they inquired about 421-g protection.

BatteryPark.TV started all of this with our stories about 421-a making buildings rent-stabilized despite the attempts to categorize them as “condo”.  DNAinfo then made their own version of the story, and now the WSJ has blown it wide open.

The WSJ states, “In March, Joel Roodman and Jill Tafrate learned their rent would increase for the Financial District apartment where they have lived with their two children since 2007. They were looking at paying $9,500 a month, up from $7,250.

Then Ms. Tafrate, loathe to move with just three months left in the school year, found out about an obscure tax credit called 421-g. Last month, the couple mentioned 421-g to the building manager. “His face went white, and he started to sweat,” Mr. Roodman said. Several weeks later, they were sued by their landlord.

The landlord, Kibel Cos., declined to comment because of the lawsuit.

The 421-g abatement was created to solve a supply-and-demand problem and was enacted in 1995 to help make the Financial District more residential. Through it, developers received tax benefits for converting lower Manhattan commercial buildings into residential ones. In exchange, landlords were required to provide tenants with rent-stabilized leases, which limits the percentage by which landlords can increase tenants’ rent and makes it harder to force them out.

There are at least 32 rental buildings, which have 5,560 apartments, that receive the 421-g tax abatement, according to an analysis of data from the New York City Department of Finance and the Independent Budget Office. Of those buildings, three buildings—just over 700 apartments—have stabilized leases, according to the buildings’ tax documents.

The enactment of 421-g was considered instrumental in luring tenants to the neighborhood that exists today. From 1995 to 2014, the population of the Financial District more than quadrupled, to 62,000 from 14,000, according to the business-improvement district Downtown Alliance. Instead of closed storefronts and post-6 p.m. empty streets, the neighborhood now boasts a growing restaurant scene, night life and shopping. 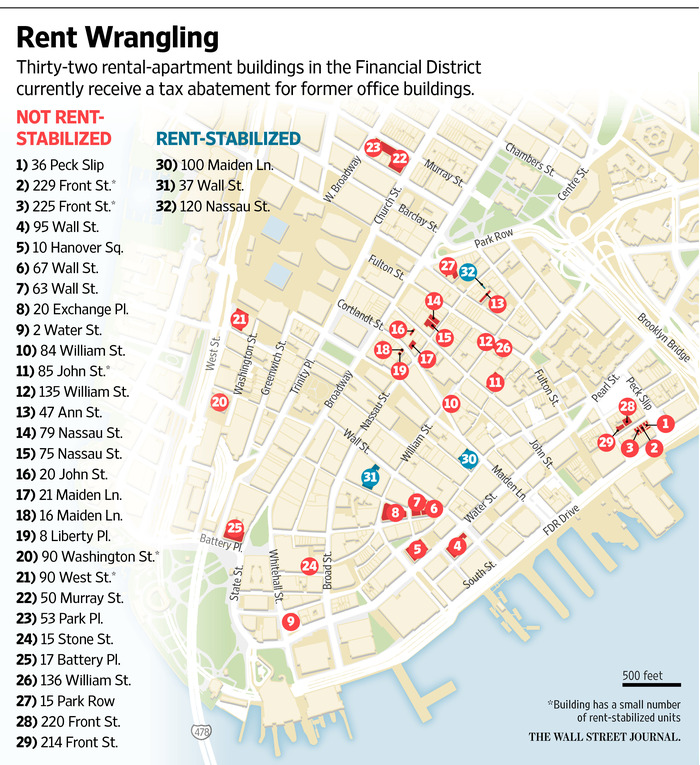 Issues involving 421-g and whether the tenants of luxury buildings can, in fact, hold stabilized leases, has surfaced before in the Financial District.

In 2010, a ruling in a lawsuit about the building 37 Wall Street found that the tenant should have a rent-stabilized lease. The landlord didn’t challenge the decision and, according to tax documents, tenants now have stabilized leases.

But the lawsuit regarding Mr. Roodman and Ms. Tafrate’s apartment in the 85 John Street building is unusual because it is a case of a landlord suing a tenant in New York State Supreme Court.

In previous years, the issue failed to win the backing of larger tenant-organizing efforts, perhaps because of the transience of younger, wealthier Financial District residents. But tenants suggest this time may be different.

“There’s no question this is bubbling up again,” said state Sen. Daniel Squadron, who represents the Financial District.

“We know that it’s clear if you lived in one of these apartments during the abatement, then you are and should be a rent-stabilized tenant,” he said. “We do believe that a lot of folks who are eligible are not being given it or not taking it.”

At stake, elected officials and community-board members say, is maintaining a community of renters, many of whom have families and are looking for a somewhat permanent living situation.

“A lot of people, especially renters, have real trepidation,” said lower Manhattan Democratic District Leader Paul Newell. “We’re not asking for a crazy thing. We’re asking to create the circumstance in which non-homeowners can put down roots.”

But the issue should be a moot point because these aren’t low-income tenants, said Nathan Berman, principal at Metro Loft Management, which specializes in converting office buildings to luxury apartments.

Metro Loft has received the 421-g abatement for several luxury buildings. “The whole point is that when you are starting out at market rent and then apply all the permissible stabilized increases, you will very likely end up with more or less a market-rent apartment anyway,” he said. “So what is there a fight about?”

In the lawsuit against the couple, Kibel argues the rule is ambiguous and it is therefore necessary to look at what lawmakers intended.

It quotes from letters, written in 1995, by then-New York City Mayor Rudy Giuliani and then-Senate Majority Leader Joseph Bruno, both of whom support an interpretation of 421-g where high-rent apartments are deregulated.

But 421-g isn’t ambiguous and the letters show only one side of a conversation, said Jesse Keenan, research director at Columbia University’s Center for Urban Real Estate. The weakness in this argument is it is a conversation between two Republicans and doesn’t show the other side, he said.

According to tax documents, the credit saved Kibel $288,697.14 in property taxes this year, although that doesn’t take into account an exemption that initially reduced the building’s assessed value.

A small room on the apartment’s lower floor housed Ms. Tafrate’s home office, for her natural-products company, and a staircase led up to spacious bedrooms.

Mr. Roodman, a film producer and entrepreneur, is organizing neighbors and talking to tenants in other buildings as well.

Tenants in his building and others—all of whom declined to be named because they feared losing their apartments—expressed similar frustrations, citing significant rent increases and the difficulty of uprooting children from neighborhood schools.

One tenant said a sign about 421-g was posted in his elevator, then promptly removed. A lawyer for this building said the management company has every intention of complying with the law.

“It’s not just about us,” Mr. Roodman said. “It’s about what everyone should do.”