We the People Need a Second American Revolution 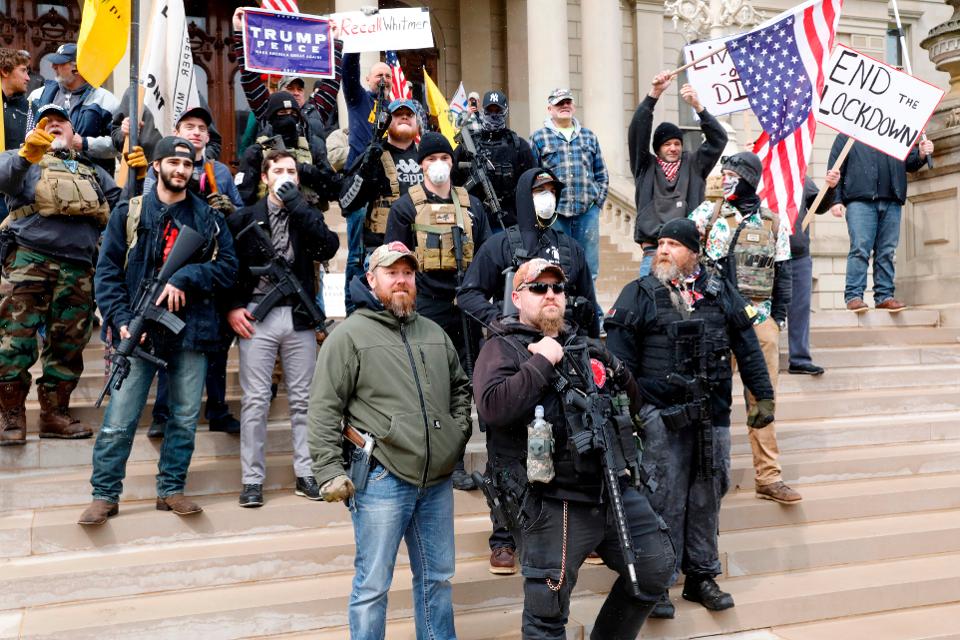 Update April 15, 2020- Armed bobs surrounded the Michigan Capitol to protest the  government stripping the civil liberties from from residents. This is what I called for below. 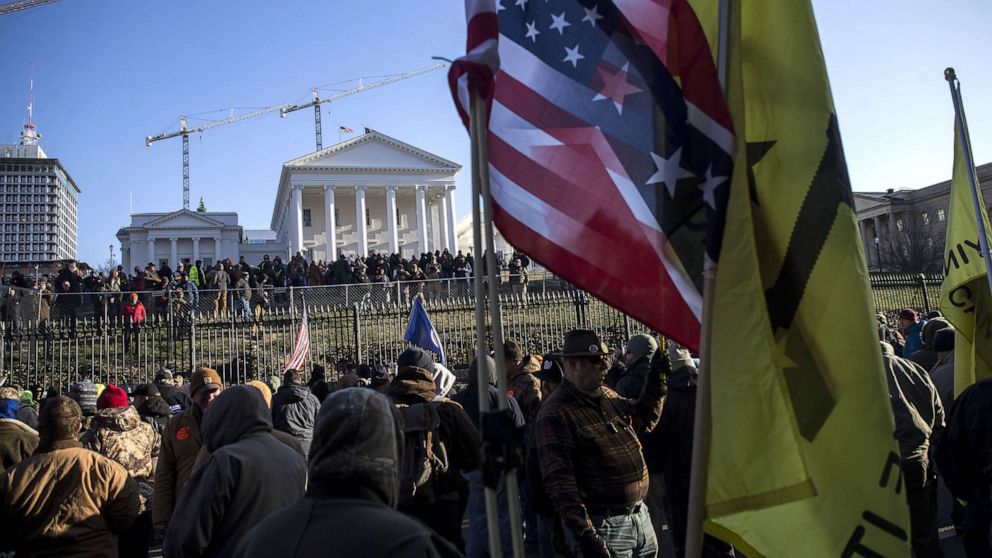 Over the weekend, we saw precisely what I had in mind when I wrote the essay below. A menacing mob of gun owners ascended upon a corrupt capitol to enforce the US Constitution, and no violence broke out. The point was made.

The DC Circuit Court of Appeals recently denied the Department of Justice’s attempt to halt the merger of AT&T and Time Warner. This had personal meaning for me since I am forced to use AT&T for internet and TV due to an illegal exclusive contract that my building formed in order to receive kickbacks from AT&T.

AT&T was already such a monopoly that it provided horrible service and malfunctioning products. I was amazed that D.C. Circuit judges could deem the merger, which would make AT&T even bigger, to be in the best interest of the public despite our own DOJ opposing the merger. Clearly, the large corporations had infiltrated our highest courts and had sway over the judges, I thought.

There are numerous other examples of oligopoly industries providing worse and worse service as they price gouge. The airlines are a great example. Why are courts so often allowing this? Why has Teddy Roosevelt been the only president in this nation’s history willing to break up companies that had grown so large as to be threats to the country? How strong of a grip do corporate lobbyists now have over elected members of congress? What laws allow such open bribery of elected officials?

Then, I realized that I was being naïve. Poor customer service and price gouging caused by monopolies are harms that pale in comparison to the other atrocities that Corporate America has perpetrated. By controlling members of congress like puppets, large companies have killed millions of Americans with impunity, literally.

The military-spy-industrial complex places war-mongering “Neocons” from both political parties into office. The dumber the politician, the better, as far as the lobbyists are concerned. George W. Bush was an ideal president for them. These global companies create never-ending wars that cost trillions upon trillions of dollars and kill or maim hundreds of thousands of young Americans. War hero President Dwight D. Eisenhower warned of this after World War 2.

The private spy companies, such as Booze-Allen-Hamilton, employ hundreds of thousands of private citizens with Top Secret clearance. None of them think that they have to obey the Fourth Amendment. Indeed, they openly sell it. Our deepest secrets are known to anyone who wants to buy them from a LexisNexis or Facebook data base (Yes, Silicon Valley as now part of the spy industry. They all have contracts with the government spy agencies. They perform the same data collection tasks as the NSA.).

American hospitals kill hundreds of thousands of patients a year from preventable medical errors, and lobbyists have passed laws making them virtually unaccountable and immune from lawsuits. Those same hospitals also cause harm by performing unnecessary procedures.

When patients cannot pay the bill due to lack of insurance, they get sued and often lose all of their assets in bankruptcy. But the crooked health insurance companies also operate without any threat of accountability as congress protects them. Obamacare was nothing but a windfall for private insurance industry. Anyone who tries to change the system is demonized by the political machines.

The FDA was created in the 1930’s in response to horrific examples of unsafe food and drugs killing people. Its prime objective is to protect Americans. However, Corporate America has perverted it into becoming nothing but an agency to protect drug exclusivity and profits via “FDA approved” labels. The coveted FDA approval simply keeps the competition at bay. The standards of safety and efficacy for drug approval have been eroded. Countless examples of drugs and medical devices with deadly adverse events remain on the market despite having marginal benefit (e.g. antidepressants).

Big Tobacco succeeded for decades at corrupting the federal government and courts in order to avoid the warning labels and public recognition of the deadly adverse events of smoking. Millions were killed as Madison Avenue marketing encouraged smoking.

The EPA has been thoroughly corrupted by lobbyists. Massive damage to our natural resources is caused by Big Energy and no action is taken. Tap water from drinking faucets catches fire due to the chemicals pumped into the well water by natural gas “fracking” companies, and homeowners have no recourse. Coal mines dump huge mounds of toxic sludge into poorly constructed dams that leech deadly toxins into rivers. Nobody is sent to jail.

Nuclear power plants have the real risk of killing millions of Americans, just as Fukushima and Chernobyl did. Yet they still operate nearby New York City at Indian Point, for example, because the lobbyists have the elected officials in their pockets.

All of these cases of mass murder were made possible through a corrupted government. One-third of the government, the legislative branch or congress, has been slowly transformed, bit by bit, into an illegitimate body according to the United States Constitution.

There is nothing constitutional about members of congress receiving large sums of money from lobbyists on a quid pro quo basis. There is nothing constitutional about gerrymandering used by the House to win elections for a lifetime (The Supreme Court refused to clarify this in Gill v. Whitford, punting it back to the lower courts.) Congress is just a large shell company through which Corporate America makes its own laws. The constitution has been hijacked.

This is all precisely what the Founding Fathers tried to prevent when they drafted the Constitution. James Madison, Thomas Jefferson, Thomas Paine, John Adams, John Jay, and Alexander Hamilton have been dead for a long time. Their spirits and ideas are all but dead too.

When the leaderless failing Democrat party attempts to ride the wave of a socialist revolution (which is really more like the Bolshevik communist revolution), sane Americans should pay attention. Radical movements do not form in a vacuum on their own. They are created by other forces. Millions and millions of people living in cities are barely able to pay the rent as nearby billionaire real estate and Wall Street tycoons grab most of the wealth. When someone like Alexandria Ocasio-Cortez pretends to be the Messiah, the downtrodden follow.

How are more than 10-million New Yorkers kept in line like sheep despite all of the corruption causing misery in their daily lives (i.e. bad roads, bad subways, high taxes, etc.)? They are part of the working class that can easily be controlled by the threat of losing their jobs if they speak out. Those jobs deliver more than just revenue to them. They mean life or death because health insurance is tied to the employer.

How does any corrupt nation stay afloat? It taxes the oppressed masses. Billionaires personally dodge most taxes as their companies pay no tax. Only the working-class schmuck gets their taxes taken straight out of their paychecks.

The corrupt America we live in in now, that is rigged to reward Corporate America on the backs of the working masses, is driving the angst that is fueling revolutions. Populism and socialism are the two real political parties in America. They are created by the small percentage of ultra-wealthy fat cats. It is a Yin and Yang concept.

However, populism, capitalism, and socialism should not be cynically lumped into the same basket. Plenty of empirical evidence shows that socialism and communism fail miserably every single time they are attempted. Venezuela is failing right now.

The United States of America is based on individual liberties. Government was supposed to be as small as possible. The American Revolution was all about fighting the British Empire and totalitarian King.

Socialism is the opposite. A large parental government controls the masses. Modern socialism is led by the European Union. European “democracies” are now subservient to a powerful group of unelected bureaucrats running the EU.

In the United States, unelected plutocrats have taken control of congress, much like the EU. Democracy is one hair away from being a farce. “Campaign donations”, which are nothing but bribes, dictate how a member of congress will act more than the fear of losing votes. Most members of congress know that they have the election process rigged no matter how unlikable they are (e.g. Turtle Man Mitch McConnell, bizarre-acting Nancy Pelosi, etc.)

There needs to be a second rising: a Second American Revolution.

We the People need to take Capitol Hill by storm and rewrite the laws that have allowed this corporate takeover of our government. Every single member of congress needs to be purged, with the exception of those who help the revolution. The time has come.

I think this could easily be a bloodless revolution. We have already seen a silent revolution utterly transform the Republican party. In just two-years of the Trump populist movement, the old-school-Karl Rove GOP (i.e. Jeff Flake, Paul Ryan, Kasich, Jeb Bush, etc.) all got ousted from office. The rest, like Lindsey Graham, saw the writing on the wall and converted religion to populism.

It will be interesting to see whether the French yellow-vest riots lead to change and a FREXIT. Already, the nations of Italy, Germany, and Sweden have expelled their Obama-stooge, EU-loving, leaders.

The United States needs a yellow-vest mob ascending Capitol Hill, weekend after weekend, until there is a purge of the swamp dwellers in 2020. That is something the communists in Hollywood and rednecks in the heartland could all agree upon.

This is my Declaration of Independence. Let the Second American Revolution commence!

We are watching a televised coup d’état orchestrated by one unpopular man abusing his committee powers in the House, Adam Schiff. He has rigged the “impeachment hearings” to the point of rendering them to be invalid and farcical. His propaganda tools in the national media are covering it nonstop on TV, despite low ratings, because they are part of the coup. The parent companies of NBC, ABC, CNN, etc. are globalists who fear Trump nationalism.

The similarities between Adam Schiff and the disgraced former Speaker of the House Newt Gingrich are striking. Both men are losers in their personal lives with little respect. That caused them to become drunk with power as they became congressmen. They both misgauged the American people as they hid inside their protective DC Swamp Bubble. Adam Schiff will suffer the same fate as Newt Gingrich.

As I wrote below, congress has been so thoroughly corrupted by the globalist corporations and political donors of those entities that it no longer resembles what the constitution designed. It is time for the masses to ascend upon Capitol Hill, surround it, set up camp for months like the French Yellow Vest riots, and oust all of the crooks with pitchforks.

Support for this revolution would grow in December as the DOJ Inspector General report drops, with criminal referrals on senior members of the DOJ for the first attempted coup that was the “Russian Collusion” hoax. After that, the U.S. Attorney for Connecticut will begin indicting members of the spy agencies for their role in it all.

In reality, what likely would happen as a result of hundreds of thousands of Americans surrounding the Capitol would be easy victory. Such mass mob disapproval in visual form, at their doorstep, would cause the feckless cowards in The House to turn tail and hide. It is time to rise up.

2 Responses to We the People Need a Second American Revolution