This is a military coup orchestrated by the Obamas

Several things have puzzled me over the last 12-months. Why did the former Democrat party (Now to be referred to as the Republican/Democrat uniparty of The American Oligarchy of Communists, or AOC), tell their viable candidates, such as Elizabeth Warren and Bernie Sanders, to give up and then rig the primaries to select Joe Biden? He was clearly suffering from dementia, making numerous gaffes. Why did they give him literally the least liked candidate of them all, Kamala Harris? Harris was so viscerally despicable that she was coming in fifth place in the California primary, her home state.

On Maria Bartiromo’s Fox Sunday show, her guest was former Director of National Intelligence Rick Grenell. He is a credible man. He spoke about what seems to be a low-level Biden administration choice to make Susan Rice, Obama’s former National Security Advisor, to run Biden’s Domestic Policy Council. It is such an unimportant job that it does not require senate approval. Grenell said that he believes Rice will actually be the shadow president. He predicts that Kamala Harris will act as the 101st senator given that there is a rare 50/50 tie now.

Then, a light bulb went off. It all makes sense now. The Obamas have been pulling the strings all along, not the Clintons or some secret Silicon Valley billionaire. Biden is well known to the Obamas and of no risk to Michelle’s 2024 run for the presidency. Harris was chosen precisely because she is so bad at campaigning. She too will be of no risk to the Obamas plan to retake the White House. Biden and Harris are the veritable useful idiots.

The other thing that has puzzled me is who orchestrated this complex and sophisticated rigging of the election? That too seems to have the Obamas fingerprints all over it.

More recently, this attack on the Capitol was clearly an inside job taken from some Deep State playbook. Who could have done that?

Well, all of the Obama Deep State stooges who tried and failed with the Russia hoax, such as CIA Director Brennan, as well as the other 99% of the Deep State that is loyal to the Obamas and hate Trump, could very well have been the ones behind it. After all, they had a vested interest in ousting Trump. They were facing humiliation and prison terms. To turn a grass roots movement, as seen with the genuine Trump supporters, 180-degrees against the movement, by using anarchist impersonators and luring the innocent into a trap, is classic military and CIA strategy.

Now, almost no one in America is aware that a huge military force has taken over Washington, DC. More than 20,000 National Guard have made camp on the Capitol grounds and set up strong fencing around a huge green zone that is more secure than the green zones they set up in Iraq. There is no legitimate reason for it. The AOC planted stories in their propaganda media that there were threats of attacks from “domestic terrorist far-right”, which have been dispelled. Why are these forces there? 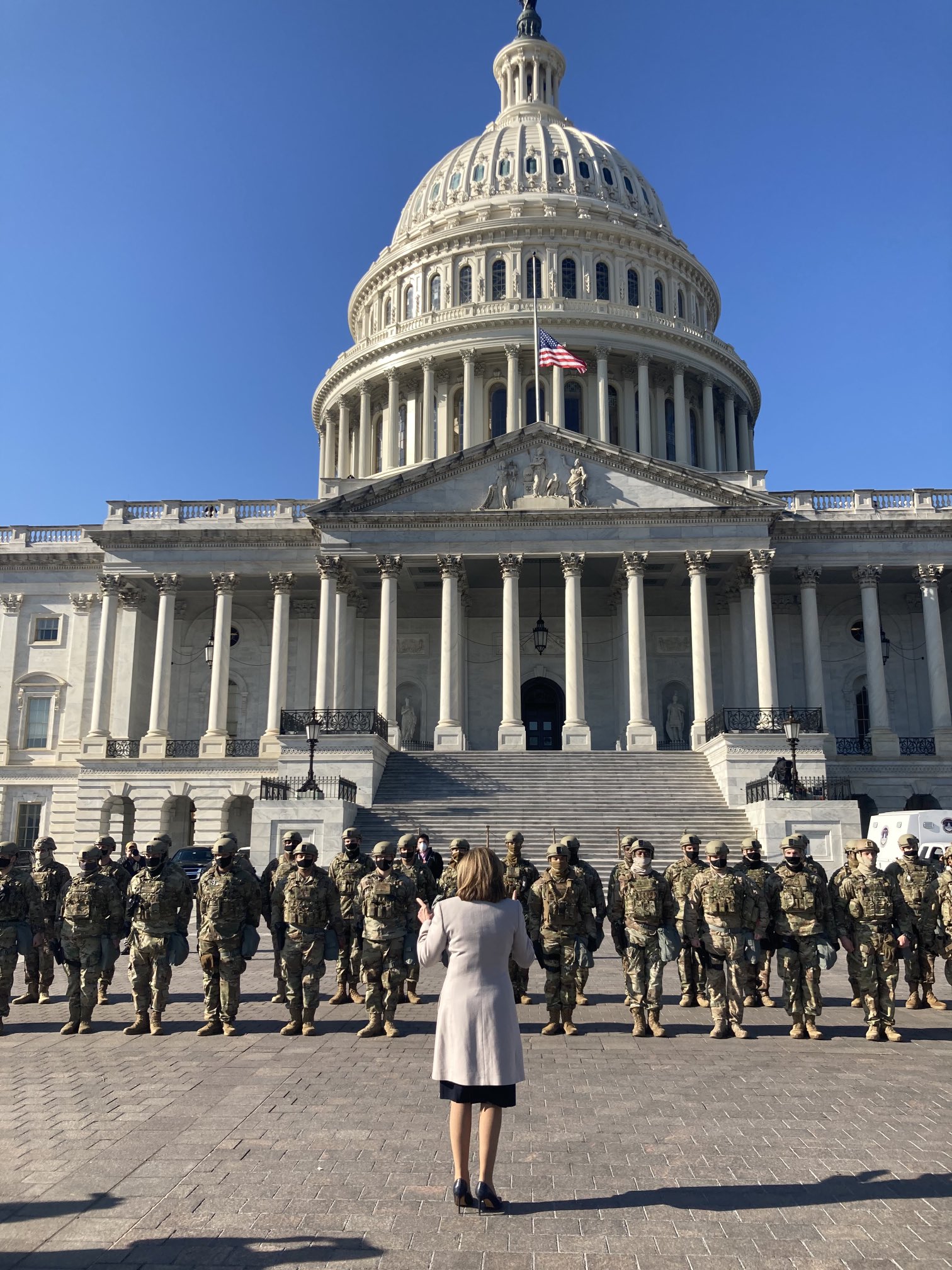 Meanwhile, Nancy Pelosi herself, acting as if she were the Commander in Chief, was ordering the troops around in front of the Capitol. This reportedly angered the Chairman of the Joint Chiefs of Staff, Mark Milley.

The Deep State’s FBI was interviewing the troops to assure there would be no mutiny. They claimed that it was normal for the FBI to vet thousands of military soldiers. Right. However, the Acting Defense Secretary Chris Miller stated that there was no evidence of an insider threat from within the troop ranks.

Folks, this is coup is now in the final military stages. Do not expect to see those fences around the AOC’s headquarters at the Capitol come down soon. This is just like East Berlin under communism.

On January 20th, Inauguration Day, the only people in the audience will be military personnel. It will look like some event put on by the Chinese Communist Party. This nation has been successfully taken over by the AOC. Will the large states of Texas and Florida be able to fight back?